by Harris Face and the Restoration 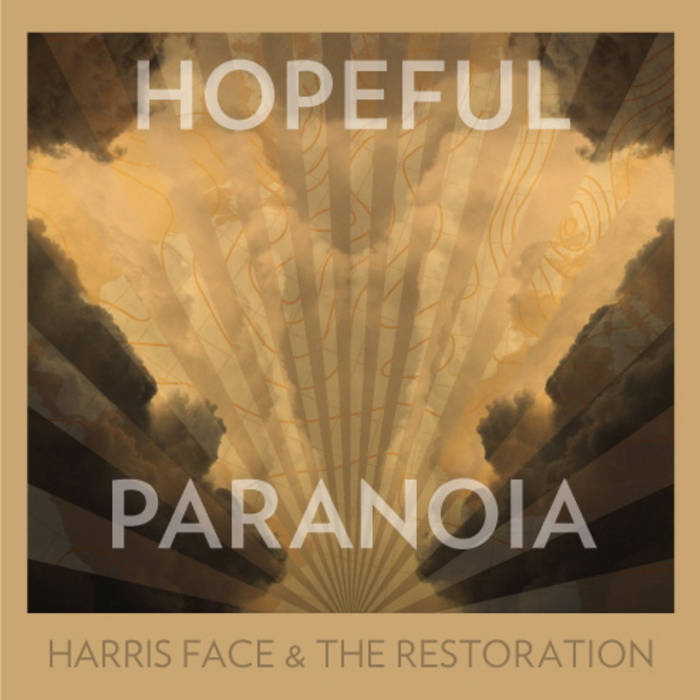 Harris Face and the Restoration are a steel guitar-driven, harmonica-sprinkled folk-rock band from Washington D.C. They are fronted by singer-songwriter Harris Face, who formed the band in the fall of 2012 to infuse his acoustic songwriting with a dose of rock n’ roll. The band has featured in DC at Rock & Roll Hotel, Iota, and Wonderland Ballroom, and in New York at the Sidewalk Cafe.

The ‘Hopeful Paranoia’ EP is a snapshot of the young band, meant to convey its own hopes, fears, and restless energy, its own storms and sunshine wrapped up in a bottle. The EP was produced by Miguel Urbiztondo (Cracker, Camper Van Beethoven) and engineered by Alan Weatherhead (Hotel Lights) at Sound of Music Studios in Richmond, VA. The resulting sound takes inspiration from alternative country rompers like Counting Crows and Dawes, as well as the honest acoustic songwriting of William Elliott Whitmore.

As a solo artist, Harris frequently has toured the Northeast and Midwest, played the Kingman Island Bluegrass & Folk Festival, and opened for the Vespers and Brothers Lazaroff. In 2012 he released an introspective 8-track acoustic EP called ‘How the Story Goes.’

Track Name: The Squall
We are the shoreline
We aren’t ready
We’ll be swept back from the coast

This time is different
This time we all will die
Flooded, drowned, or burnt to toast

I take my eyes off yours
Outside the window, winks the eye of the storm

None of this is real
You’ll never get your way
Our wills are no match for the fates
Track Name: Harder Times
I can prove you’ll be alright, that things are things
That our souls remain the same
We wipe our eyes, and wipe our memories clean
No we didn’t mean to change

Stood behind the bleeding sun, at the funeral scene
Turned shovels upside down
Tossed words that don’t mean anything
But we need that sound, ‘cause

Saw you sitting outside in the cold green light, as the wind picked up
The trees began to dance
Their favorite song is the thunderclap
And we need that rain, to

It could’ve been for life
The thought it kills you inside
Now that it didn’t work out
Just have a drink and settle down
You reached a great divide
You’ll cross it when you die
You ask yourself, is this real life?
Or is this just another Sunday night at Wonderland

Oh, you’ve got me kickin’ up dirt
In the wake of a roadrunner, can’t keep pace
I’m gettin’ vertigo babe, you’re a hell of a girl to upstage
You can still save face

Oh it’s a kick in the face
But one we all have to take
Can’t we be normal again?
Why can’t we all be friends?
You see that great divide
We’ll cross it when we die
For now we’re still alive
Alive for just another Sunday night at Wonderland

Hometown I hate you back!
You’re not the one
Hometown you held me back!
Swear I’m still fun
On the Jersey Turnpike south to Washington

In the darkest bar on the edge of town
That’s where we meet to plan our rounds, now
Have you noticed I’ve been chasing ghosts?
So don’t you wait for me alone

We’re the shadiest bunch, gathered round a dark black box
I pick the lock and the rain pours out, now
Have you noticed I’ve been chasing ghosts?
So don’t you wait for me alone

Before I meet ‘em they’re a purple shade
I let ‘em go when they’re safely grey, now
Have you noticed I’ve been chasing ghosts?
So don’t you wait for me alone

I fought the ghost of rock n’ roll
He swept my feet, I fell to the floor
I scrambled up in time to sing
Would you just lay me to rest? That’s all I need.

There are holes in your stories you just can’ be believed
You act cold you act distant, and history repeats

Every pointless confrontation
Every pause, excuse or explanation
If I had a dime for every time I drove you crazy I’d be rich and lonely

If I had a dime for every time you proved me wrong
Well I’d be rich and lonely
Track Name: Escalator Romance
I was flying down the stairs was
in a rush to nowhere new
She was gliding like an angel
up the stairs just passing threw

Well I think it’s getting warm in here

I was lonely, I was lucky,
when I stopped to say hello
I fell backwards up the stairs well,
I fell straight into her arms

Bandcamp Daily  your guide to the world of Bandcamp